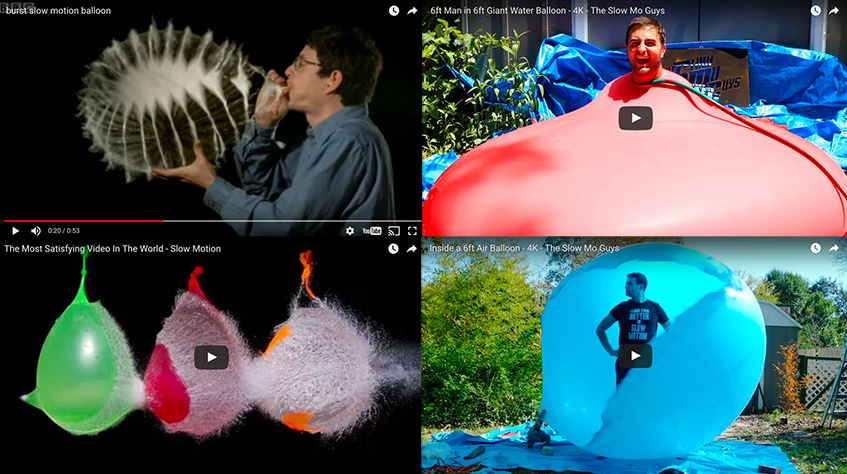 We’ve all seen balloons pop plenty of times. Typical stuff, right? Except, our eyes can only process the balloon bursting in real-time.

In reality, a whole heck of a lot is happening to that balloon, but it happens too fast for our meager human peepers to capture what really is going on.

Thankfully, our generation has some super cool, highly advanced technology that can capture, slow down, and rewind the thousands of actions happening in the flash of a second it takes for a balloon to burst.

If you’ve never actually seen what it looks like when a balloon bursts, and we mean really seen what happens, then you absolutely cannot miss these videos. We’ve compiled 10 of the wildest slow motion balloon burst captures you’ll ever see.

The first set of videos comes from the guys at the Slow Mo Lab. They use an incredible camera that captures 60,000 frames per second of video. (Your top-of-the-line smart phone slow-motion camera captures a maximum of just 240 frames per second.)

In this video, they blow up a pair of large, white latex balloons (jump to 1:32 to see the slow-motion balloon burst) until they can’t handle any more air and finally give way.

What’s amazing about this when you see it in slow motion is how much the latex resembles it’s original, milky liquid form as it splits and retracts backward toward the back of the balloon. (Yes, latex balloons start as a liquid that is tapped from trees. See the video here.)

2. Balloon in a balloon, which bursts first?

In this second experiment from the Slow Mo Lab, they inflate a dark colored balloon inside of a second, clear balloon. Using the sun and a magnifying glass, they pop the balloons. Will the balloons burst at the same time? Separately? Not at all?

The results are probably not what you think, but the slow motion camera reveals what our naked eye cannot see:

In the final Slow Mo Lab film, the host inflates a massive, 3-foot latex balloon. To expedite the process, he uses a leaf blower. When the thing finally blows around the 1:30 mark, you simply see the balloon disappear. Then they replay the pop in slow motion and the result is something that resembles the best special effects in Hollywood.

The first of our water balloon burst videos is a pretty old one in technology terms, dating back to 2007. Jump to the 39-second mark and the host pops a yellow water balloon with a pin.

Keep watching for the slow motion replay and you see something gorgeous. The shimmering water maintains its balloon shape as the yellow latex peels itself back from the pin point. Finally, after a few thousand frames, the water succombs to gravity.

In the second water balloon video, we have a man in his backyard taking a dart to a green water balloon. Hitting it directly in the center, you notice a burst pattern unlike any of the others above. It’s as if someone rapidly unzipped the balloon around its equator and then both the top and bottom retracted toward the poles. As in the previous video, the shimmering water remains in the balloon shape for some time before falling to the grass.

6. Dark side of the balloon

The third water balloon burst slow motion video is a trippy one! Instead of water, these colorful balloons are filled with even more colorful liquids, and rather than popping them with a pin, the experimenter shoots them with BBs and tiny cannon balls. The result? A sort of small scale reenactment of what we imagine asteroids and meteorites hitting an ocean would look like. Have a look:

We chose this 20,000 fps video because it shows exactly what happens each and every time you pop a regular latex helium balloon with a pin. Notice how the latex of the balloon retracts. It will always peel away from the pin point to the exact opposite point of the prick.

You could draw a straight line from the needle to the opposite point where the latex finally ends and this video shows this action perfectly:

Why do we love this BBC video so much? It’s beautiful and kind of creepy. The very first balloon is simply over-inflated, and the resulting burst pattern is similar to the giant balloon in number 3 above. Using a white latex balloon here, the result looks exactly like the ribcage of your Halloween skeleton decoration.

The second slow motion balloon burst in this video is done with steam, and the resulting pattern is far different. Notice how the balloon simply opens up at the melting point, from which the entire balloon splits apart like the mouth of pac-man going after a ghost.

9. Man in the balloon

In what may be the coolest way ever to make an entrance, this video from the Slow Mo Guys actually puts a man inside of a giant, 6-foot latex balloon. They then over inflate it using a leaf blower until it bursts, perfectly revealing the host from behind the peeled balloon.

What we love about this video is how long it actually takes for the host to flinch. It seems like an eternity from the point of the slow motion balloon burst to the point of his reaction, even though in real time it all happens nearly at the same time. Check it out:

10. Man in the water balloon

The final video is again from the Slow Mo Guys and this time, they’re putting a man in a water balloon. What happens when you put a 6-foot man inside of a 6-foot water balloon, over fill it and then film it in 4K resolution? THIS:

How to pop a latex balloon with an orange peel