HomeNitrogenWhat is nitro coffee and how is it made? 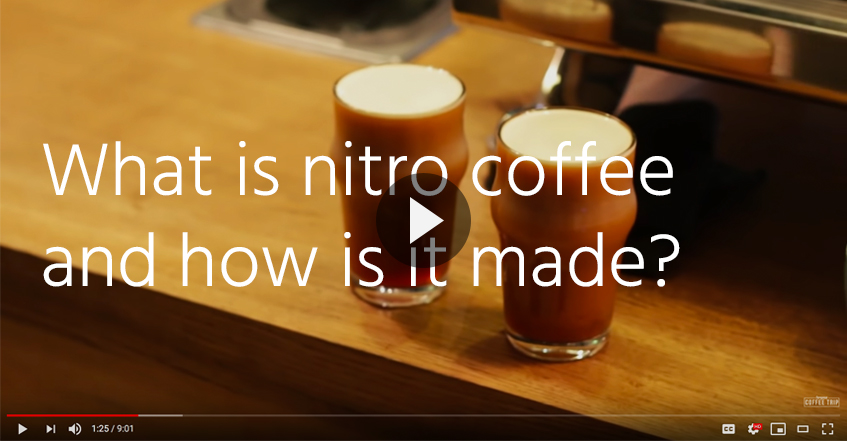 What is nitro coffee and how is it made?

by Kathi Leidenon 29 November 2019in Nitrogen
Nitro coffee is becoming increasingly popular around the world. We get into what it is exactly, how it’s made, and why nitrogen changes the drink.

What is nitro coffee?

Nitro coffee is simply coffee infused with nitrogen gas. While baristas may lose sleep selecting just the right coffees to compliment the nitrogen, the actual process of making it is quite simple.

It’s served through the same tap system set up you’d find in a bar— a keg of coffee, a tank of nitrogen gas, and a tap. (In fact, special taps are now made for nitro coffee that don’t get worn down by the acidity of the coffee flowing through them.)

As the barista pulls on the draft handle, the coffee runs from the keg where it’s infused with nitrogen as it runs up through the lines and ultimately ending in the glass in-hand. It can be served hot, but nitro coffee is almost always enjoyed and preferred cold.

“It doesn’t affect the taste itself, but it affects the way you perceive the taste.” The words of Berlin’s Happy Barista co-founder in the video and probably the most accurate description of nitro coffee that could be stated.

Nitro coffee is just like a Guiness draft beer in that it’s infused with nitrogen and served in a glass from a tap. The resulting texture is creamy and smooth and actually has a large, creamy head when poured— known as the “waterfall effect.” In fact, many people choose nitro coffee because it tastes like a mixture of coffee and milk, but without any milk or cream added.

So you may ask, it the nitrogen doesn’t actually change the taste, how does it make black coffee taste like it has cream in it?

It’s a trick on the senses, mainly. The introduction of nitrogen injects the coffee with hundreds of thousands if not millions of micro-bubbles and when these cascade across your tongue as you drink, it makes the coffee feel smoother, thicker, and more luxurious in your mouth while eliminating much of the bitterness found in regular black coffee. This gives a similar sensation and sweetness, as if you’d added milk or cream.

Does your business serve nitro coffee?

At Zephyr, we provide nitrogen gas and carbon dioxide gas for the food and beverage and brewing industries— and we stand by our continuous service to any location in the U.S. Get a free nitrogen or CO2 quote from us here!
Share this article
0
0
0
Tags: Food and Beverage, Nitro Coffee, nitrogen, nitrogen gas

Finding the right propane supplier near me