HomeCO2Why and how we brew with CO2 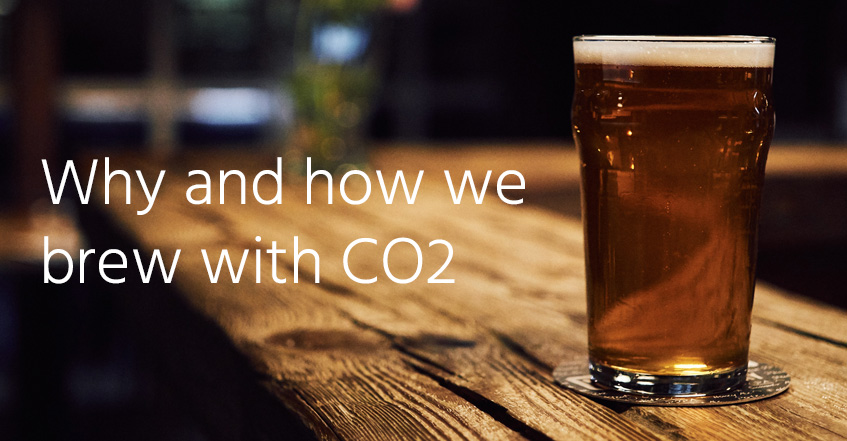 Why and how we brew with CO2

It’s Oktoberfest time, so in the spirit of the annual sudsy tradition, we dive into why and how we brew with CO2.

Let’s start with the beer. If you’ve ever been warned that beer is not the solution, you can reply with, “Maybe not, but it is a solution.” In the scientific sense, that is.

Beer starts with a relatively simple ingredient list: wort, water, grains. When brewer’s yeast is added to this mixture, it consumes the sugar and starch in the wort. The “waste product” of this activity is alcohol and natural carbon dioxide (CO2) gas. This is the fermentation process.

As the CO2 dissolves in the beer, the molecules expand outward, attract and become surrounded by the water molecules in the beer. This is known as dissolution.

Historically, much of the natural CO2 byproduct escaped into the air during brewing, but most modern breweries and microbreweries today use a CO2 capture system that pumps the gas back into the vats.

When fermentation is complete, the vats are sealed to allow the CO2 in the beer as well as in the headspace (the air above the liquid) of the vat to pressurize and promote natural carbonation. Simple, electronic CO2 monitors measure the levels during production and storage.

While the CO2 gas present during brewing forms as a natural by-product of the fermentation process, bottling poses a carbonation problem if intervention is not taken.

In order to ensure the CO2 in the beer doesn’t escape prior to hitting shelves, CO2 gas is injected into each bottle prior to the beer being filled. This also minimizes the exposure of the liquid to oxygen and reduces foam.

Prior to capping the bottle, some breweries even go so far as to draw out the air in the headspace between the beer and the cap, replacing that with CO2 gas. This allows beer to remain fresher for longer, which is useful on store shelves, particularly if they are not refrigerated.

CO2 in kegs and taps

Have you ever wondered how your draft of choice travels from wherever the kegs are stored, up through the taps at the bar, and into your glass? Since this is a CO2 article, you’ve already guess it.

Pressurized CO2 systems force the beer from the keg, up through the lines, to the tap. Not only does the carbon dioxide gas act as the pressure system to allow the liquid to defy gravity, it also helps ensure optimum carbonation of the beer during the last leg of its trip.

We’ve simplified the above information to give an overview into why and how we brew with CO2. However, the process from brewing to keg storage requires a lot of precise knowledge and science. A lot can go wrong if certain balances are not maintained.

Have you ever felt oddly full or bloated after a draft or two? This is usually because the temperature at which the kegs are being stored is too low. Beer that is too cold traps excess CO2 and may taste flat at first, but as it warms the trapped gas begins to expel. Most of it is expelling in your stomach as your body temperature warms the beer. This leads to that belchy, bloated feeling.

Have you had a beer that seems over carbonated, almost hard to drink? This happens when the CO2 pressure is too high. The beer simply absorbs the excess gas.

Contrarily, too little pressure in the kegs can lead to the beer going flat as the CO2 in the liquid is allowed to bubble out of the liquid.

Can you brew without CO2

Stout drinkers will know, you can brew with nitrogen instead of CO2. Nitrogen gives beer an entirely different taste, texture, and style, but we’ll get into that next month.

At Zephyr, we provide carbon dioxide gas throughout North America, specializing in the food, beverage, and brewing industries for controlled atmosphere packaging and storage, moisture degradation and oxidation control, pest prevention, as well as for soft drink carbonation and pH control.

Helium exploration advancements will be driven by necessity