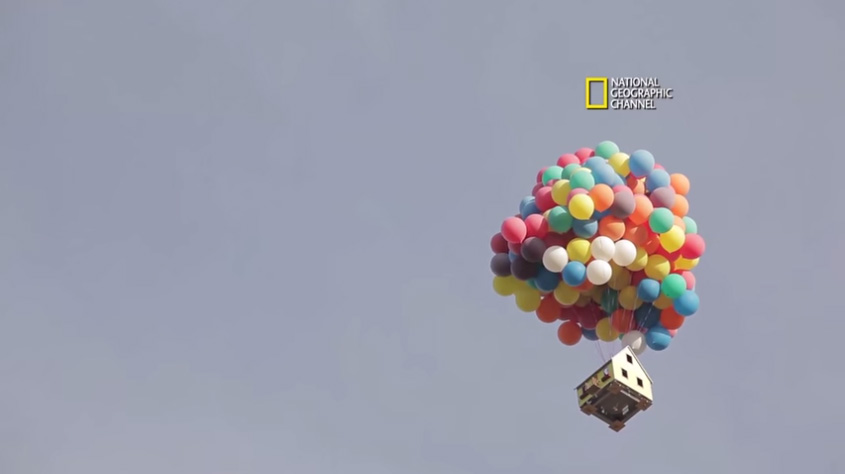 It’s not the animated movie. This is a real house – the largest object ever lifted with helium balloons. Check out these 13 incredible helium world records.

In the video above, you can see the preparation and ultimate launch of a 4,335-pound house – the largest object ever lifted by helium balloons as recognized by Guinness World Records. Inspired by Disney’s animated movie, “Up,” the crew of National Geographic’s How Hard Can It Be? spent two weeks in Los Angeles building and rigging the house and filling 300 8-foot helium balloons. The final balloon cluster itself measured 100 feet tall and carried the house to 10,000 feet.

Trying to break a helium record? Or just stock up for your store? Get a helium quote here.

Jonathan Trappe’s The Spirit Cluster – a seat tied to 57 large helium balloons – carried him across North Carolina for 13 hours, 36 minutes, and 57 seconds, setting a new world record for the longest duration flight by helium balloons. Although unofficial, it’s also believed to be the first helium balloon cluster flight to launch during daylight and fly through the night.

3. First solo crossing of the Atlantic Ocean in a helium balloon (1984)

Colonel Joseph P. Kittinger of the United States Air Force successfully landed his helium balloon near Savona, Italy on September 18, 1984, 86 hours after his launch from Caribou, Maine, 3,543 miles away. In doing so, he became the first person to cross the Atlantic in a solo helium balloon flight.

The largest refrigerator ever built is the Large Hadron Collider. The LHC uses 9,300 powerful magnets to whip particles around its 17-mile track, but to prevent melting, the magnetic coils have to be cooled. Frozen, actually. So the collider uses 96 metric tons of superfluid helium in part of a three-step, 2-week process to cool the magnets down to a final temperature of -456.34°F. That’s cold!

Indian celebrity Raja Hasan led a group of 303 Mumbai singers, each of which inhaled helium (which you should never, ever do by the way) before collectively squeaking out a song together. Guinness World Records made it official on March 26, 2011.

Eight million people hopped on YouTube to watch Felix Baumgartner jump from the edge of space on October 14, 2012. It was the highest free-fall parachute jump ever performed (beating the mark of the same Joe Kittinger from record number 3 in our list) and the highest manned helium balloon flight ever recorded, hitting an altitude of 127,852 feet. In 2014, Google executive Alan Eustace very quietly topped Baumgartner with his own space dive, hitting 135,892.3 feet before jumping from his helium balloon.

7. Largest helium balloon with a person onboard (2012)

In the very same flight in which Felix Baumgartner performed his edge-of-space dive, the stuntman also set the Guinness World Record for the largest helium balloon with a human onboard.

8. Longest time to float a continuous spark inside of a helium balloon (2012)

Greg Arrigoni used 1434 balloons to build a balloon arch that measured 600 feet across and 340 feet tall. The massive arch required 65 helium tanks to fill the balloons to create the arch, which was built at the 150th anniversary festival in St. Paul, Minnesota.

The USS Akron and USS Macon were sister ships built by Goodyear in Akron, Ohio for the U.S. Navy. The helium airships were designed to be arial aircraft carriers, storing Curtiss Sparrowhawk and Fleet N2Y-1 biplanes. With a capacity of 6.85 million cubic feet of helium, they remain the largest helium-filled airships ever built.

Sadly, both the Macon and the Akron crashed shortly after their debuts, with the latter holding the record of the most fatalities of any airship crash in world history (73).

Leonid Tiukhtyaev and Troy Bradley of the Two Eagles balloon team broke two of the most coveted world records in aviation in June of this year. The team flew in a helium-filled balloon from Japan to Mexico, becoming the first people to ever cross the Pacific Ocean and setting the world record for the furthest distance ever traveled in a helium balloon. And for the team’s second record…

The Two Eagles trans-Pacific flight lasted 160 hours and 34 minutes (or if you prefer: 6 days, 16 hours, and 34 minutes), which broke a 37-year-old world record for the longest duration flight in a helium balloon. The old mark was set above the Atlantic Ocean in 1978 and lasted 137 hours, 5 minutes, and 50 seconds.

13. Most helium balloons ever released simultaneously (1986)

Balloonfest ’86 was a fundraising effort of the United Way that set out to beat Disneyland’s world record, set the year prior during the celebration of the park’s 30th year of operation. After nearly being cancelled due to weather, Balloonfest ’86 saw the release of 1.5 million latex helium balloons from the streets of Cleveland, Ohio setting the last world record for the most ever released at once.