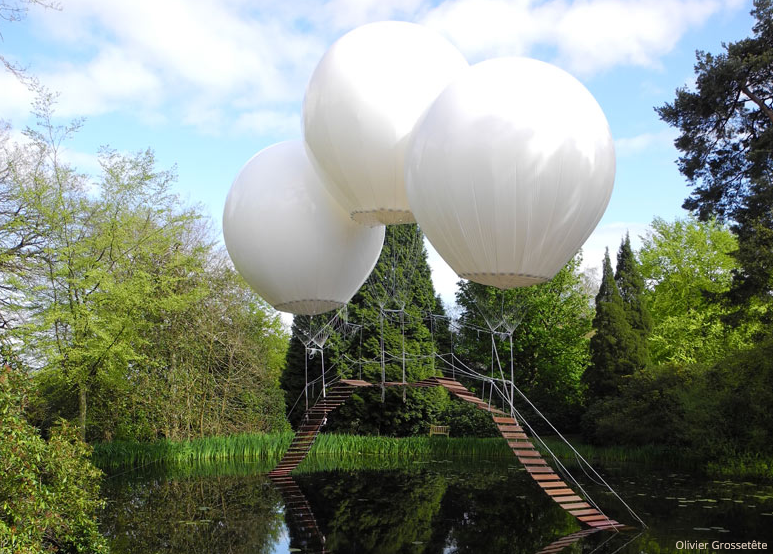 Helium balloons can actually be used for a lot of wild purposes. We’ve put together the 15 craziest uses for helium balloons that we could find.

Part of a NASA-backed graduate student project, a high-altitude helium balloon was fitted with sensitive infrared microphones and released into the stratosphere, 123,000 feet over New Mexico and Arizona last year. The microphones, which can detect sounds that are too low for a human air to pick up, recorded strange sounds that have not yet been explained. You can actually listen to these sounds here or in the video.

In 2014, Eric Matthew Frein was on the run for nearly two months after murdering a police officer and critically wounding another. To get eyes in the skies, Pennsylvania State Police suspended surveillance equipment and cameras from a giant helium balloon that was donated by the Ohio Department of Transportation and set it loose over the Poconos. Frein was eventually caught on the ground by U.S. Marshals.

A mystery arose in Alabama in 2014 after a family found a pair of wedding rings attached to two deflated helium balloons. The rings were turned into the police in the hopes that the owners would come forward to claim them. The owner, Caley Burkett, did eventually come forward. However, it wasn’t to claim them. Burkett told police she released the rings into the sky in an effort to move on from her failed marriage and that she did not want them back. Need helium for your balloons? Don’t worry, we won’t ask any questions. Get a free quote from us here!

Former White Stripes frontman Jack White decided to release his new single in more ways than one. Copies of “Freedom at 21” were attached to biodegradable latex helium balloons and sent into the skies of Nashville for fans to find. One thousand helium balloons and discs were set loose with postcards that encouraged fans that found the discs to report their discoveries to White’s website, thirdmanrecords.com.

Have you ever heard of archaeology performed in the sky? UC San Diego anthropology professor Thomas Levy has combined archaeology with engineering, computer science, and helium balloons. He used the balloons to fly high-definition cameras over the historical sites so that they could be accurately mapped and recreated in 3-D. Especially useful for at-risk areas, 3-D recreations allow anyone to tour and explore a historical site and most importantly, a “copy” of the sites can be preserved forever digitally.

Imagine being able to jump over an entire football field in a single bound! One of the more popular hobbies in the 1920s was something called “balloon jumping.” A person would be strapped into a harness that hung from beneath a helium balloon, which was counter balanced to support the jumper’s exact weight, minus four pounds. This balancing act allowed the jumper to leap 40 feet into the air and cover a distance of 300 feet, but also prevented him or her from floating away.

As you may or may not know, North Korea has no Internet. It’s dictatorship allows no connection to the outside world and armed guards block the borders. So, human rights groups are getting creative in looking for ways to bring a connection to North Korean citizens. They used helium balloons to transport personal bundles, each of which contained DVDs, radios, news flyers, and USB drives. The balloons were launched from South Korea during northern winds. Once the helium balloon flies far enough north, a timer within each bundle detonates the packaging, dropping the information from the sky.

Information isn’t the only thing being smuggled into North Korea via helium balloon. South Korean activists are also delivering Choco Pies to North Koreans. The pies, basically a chocolate encased marshmallow, became so popular in the demilitarized zone grew to a point where they were being used as currency to pay workers overtime, which is against North Korean law. The workers would then take the Choco Pies back to the city where they were sold on the black market for several times their original price. Cited as being a “symbol of capitalism,” North Korea promptly banned Choco Pies.

9. Spying on the government

It sounds like a movie plot, but a small, private group of hackers have created a helium balloon spy probe that they’ve launched to monitor the behaviors and communications of government drones. The probe floats 15 miles above the Earth beneath a 8-foot helium weather balloon. The goal of the project, according to the group, is to create a public, crowd-sourced collection of data for the tracking of air-to-space government communication.

“Monkey Bridge.” That’s the translation of Pont de Singe, which was a rope bridge constructed over a pond in Tatton Park in England. The bridge was the vision of French artist Olivier Grossetête, who built it from rope and panels of cedar. It was suspended by nothing more than three huge helium balloons, which were buoyant enough to support a person crossing. However, walkers could only observe the bridge because both ends intentionally disappeared into the pond.

After being pulled over for rolling a stop sign, this driver decided to get rid of the illegal drugs in his van with the most unique method ever. As the officer returned to his cruiser to process the driver’s information, the driver tied the drugs to helium balloons, tossed the balloons out of the window, and sent the drugs skyward.

Having a hard time reaching the ceiling and corners of your house where cobwebs and dust collects? Just pull a helium balloon along those areas you can’t reach. Those webs and dust particles will cling right to that balloon!

Did you know that volcanic eruptions cool the planet? We didn’t either, but it checks out. The sulphur dioxide particles released from an eruption form tiny droplets of sulphuric acid in the upper atmosphere, which reflects sunlight (and also creates acid rain). The SPICE (Stratospheric Particle Injection for Climate Engineering) Project looked into what other, safer particles could be artificially injected into the atmosphere to help slow global warming. But it’s the delivery system for those particles that we’re interested in: A massive hose suspended in the sky by an even more massive helium balloon. An experiment was in the works, but ultimately cancelled for being too controversial.

Last summer, a group of innovative students in New Orleans launched a series of large, red helium balloons for the purpose of monitoring the health of Louisiana’s wetlands— a hot topic in the state since Hurricane Katrina. Using cameras mounted inside pop bottles, the students were able to take aerial imagery of the wetlands. The images were then stitched together using open-source software and the resulting visual maps could then be saved and used to compare to other maps over time.

To try to prevent humans from contaminating space, we must contaminate space. Make sense? There is bacteria on every surface on Earth and because of this, there is great concern that we are contaminating Mars when we drop spacecrafts and rovers on its surface. NASA already confirmed Earth bacteria on the outside of the Mars rovers, and this is a major concern as we continue to look for evidence of life on the red planet. In order to learn how bacteria reacts to the harshness of space, NASA’s project E-MIST (Exposing Microorganisms in the Stratosphere) uses a giant helium balloon to send all kinds of germy samples up to the stratosphere, where the intense sunlight and thin air mimic the conditions on Mars.

Helium drone with gripper tongue can pick up, drop off deliveries

A helium balloon that does its own charcoal drawings