HomeHeliumHelium air mixer extends the life of your helium tanks 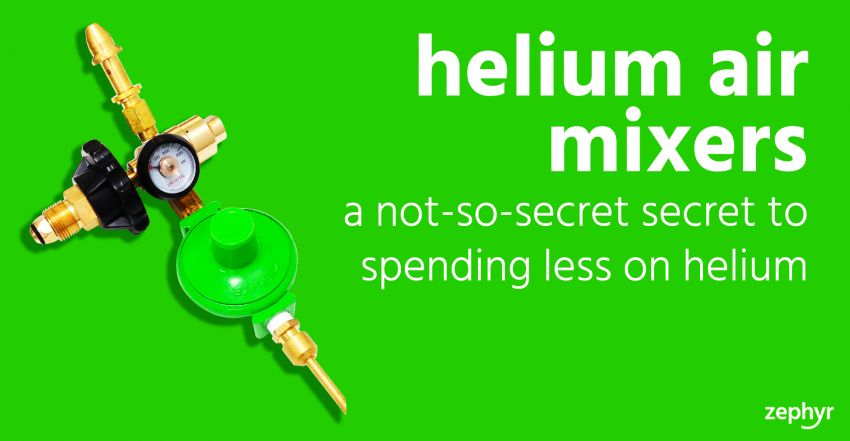 Helium air mixer extends the life of your helium tanks

Want your helium tank to last as much as 40% longer? Here’s a secret — use a helium air mixer instead of your normal regulator.

OK, so you may know that we are the expert helium provider, which is how we pay our own bills and feed our children’s faces. So you might be asking, “Why are you giving me a tip that means I’ll have to buy LESS helium?”

Well, the answer is simple friend: We like to look out for our customers and partners! We don’t just sell helium, we find the right solution for our clients, especially when that means we can help save you some money. And a helium air mixer is a great way to do just that.

After all, our name is Zephyr SOLUTIONS! (We’re still happy to offer you our helium! Get a free helium quote from Zephyr!)

A helium air mixer does exactly what it says: It mixes air into the helium being transferred from the tank.

There are a few options available on exactly how much air mixes in, but the standard helium air mixer is usually a 60/40 regulator. That is, with every release of the valve, 60% of the normal amount of helium is being used. The other 40% is air.

Using a 60/40 helium air mixer, you extend the life of your helium tank by as much as 40%. That means less refills, and less purchasing.

Can I use a helium air mixer for latex and foil balloons?

Yes! There is a helium air mixer out there for every purpose, including those specific for latex balloons and for foil/mylar balloons.

For example, we produce our own line, and have one for latex balloons, and a Dual inflator that can fill both foil balloons and latex balloons without having to switch the regulator off the tank.

Will my balloons still float?

Yes! The majority of the fill is still helium, so your balloons will still float. However, they will not float as long as they would if filled with 100% helium.

Yes! A helium air mixer can still operate just the same as a regular regulator.

Since the air used to mix with the helium is simply pulled from the environment around you, most helium air mixers simply allow you to close off the valve that pulls in the air. Now you’re working with 100% helium when you need it.

So there you have it! Need to make that helium work a little longer and harder for you? A helium air mixer is truly an investment that pays off nearly immediately.

Thanksgiving helium balloons were let go after the parade