HomeHeliumWould a helium balloon float on the moon? 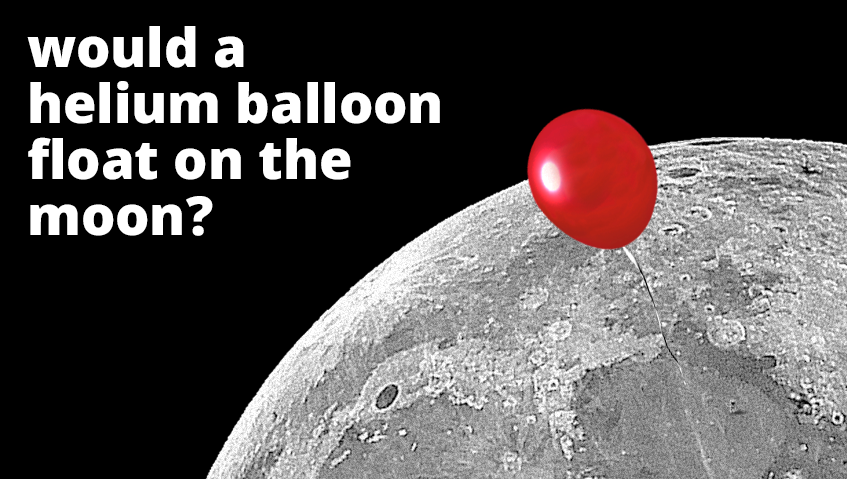 Would a helium balloon float on the moon?

We’ve all seen the footage of astronauts bouncing on the moon as if they were floating. What if they took a helium balloon up—would it float?

After all, the gravity on the moon is only about a sixth as strong as the gravity on Earth, which means if you stood on the moon’s surface, you’d only weigh 1/6 of what that scale in your bathroom revealed this morning. That’s why the astronauts looked like they’re floating when they jumped.

So, if a helium balloon was released from the surface of the moon, would it shoot up into space six times faster than it floats up on Earth?

No! Quite the opposite actually. It would drop to your feet.

Why? The key is atmospheric pressure and buoyancy.

Think of it like this— if you pour the contents out of a pop bottle, cap it back up, and hold it underwater, when you let go that bottle will shoot up to the surface of the water. That’s because the air inside is much lighter than the water around it and therefore, the buoyant bottle quickly floats to the top.

On the moon, there is no air. No real atmosphere. It’s a vacuum. That’s why the astronauts wore fully enclosed breathing suits.

Since there is no surrounding air, there is nothing for the helium to float above. There’s nothing to push it up. Therefore, no matter how much helium is inside that balloon, it will drop and settle in the lunar dust.

We can’t fly up to the moon to demonstrate this, but thankfully we can create vacuums here on Earth. That is exactly what Peter s p Lim did in the clip below. His demonstration is a fairly accurate representation (he created a partial vacuum) of what would happen if a balloon was released on the surface of the moon.

So there you have it!

If you’re having a party on the moon any time soon, decorate appropriately! The balloon arch and columns would still work perfectly fine. 🙂

Grades of helium: the differences and uses