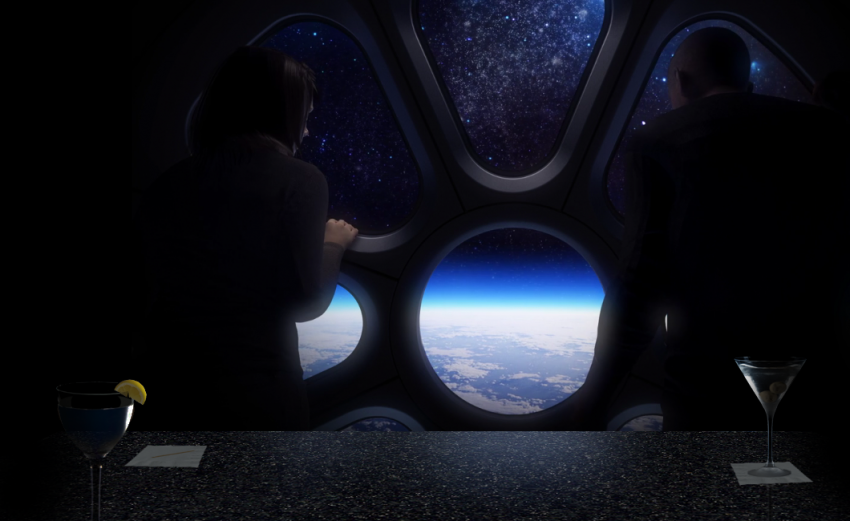 Imagine enjoying martinis and small plates at the bar, but that bar happens to be floating quietly over the Earth at the black edge of space.

That’s some wild dream! Except it’s quite real, and for $75,000 you can reserve a bar stool for an upcoming flight.

The company offering the luxury space flights is called World View Enterprises and it’s powered by some serious experience: A retired NASA astronaut, the former NASA Associate Administrator for Science, designers and crew from the Biosphere 2 project, scientists from the International Space Station, and experts in human spaceflight and high-altitude ballooning.

World View is also incubated by Paragon Space Development Corporation. That’s the company behind the StratEx project in which Google executive Alan Eustace broke the space dive record by jumping from a helium balloon at an altitude of 135,908 feet.

While the space cruise won’t soar quite as high as Eustace did, the helium balloon technology used in both projects is nearly identical.

Need helium for use on the Earth? Get a free helium quote here.

The cruising capsule, which seats 8, is tethered to an enormous helium balloon. But because adjectives aren’t sufficient enough to give a real sense of scale AND because we love helium balloons, here are some quick statistics:

• The helium balloon expands to the circumference of a typical football STADIUM
• The full volume of helium is 40,000,000 cubic feet
• It would take 182,648 Zephyr helium cylinders to fill the balloon for one flight
• The skin of the helium balloon is a polyethylene film—incredibly strong but so thin you can see through it!

How many helium balloons do you know of that would take 20 minutes to walk around!? OK, back to the flight…

According to the company’s website, the helium balloon will lift the capsule for about two hours until it hits an altitude of just over 100,000 feet. That’s 22 miles above the surface of the Earth!

At this height, the passengers are literally at the edge of space in what’s called the stratosphere.

The helium balloon ride: Look back at your planet

Once at cruising altitude, the passengers get to enjoy a 2-hour float in the blackness of the stratosphere looking down on the curvature of the bright blue Earth.

And yes, there’s a bar. Oh, and wi-fi too so that you can have a chance to set the record for the highest altitude selfie ever uploaded to the tweeter.

Once it’s time to return to the planet, the pilot (yes, there’s a crew onboard) begins to vent helium from the balloon before the passenger capsule is cut free (the balloon is later tracked down by a ground crew and recycled).

The next hour is spent descending back down to Earth under a giant parachute, where winds can deposit you as far as 300 miles away from the launch site. (Don’t worry, a private plane ride back to the launch site is included in the ticket price.)

The entire experience lasts less than a work day—about 5-6 hours—so that you can get home in time for Earth dinner.

If you’ve got the bank and are looking to leave the planet for a few hours, the first trips are planned for the end of this year.

If you’re afraid of heights or you’re like us and can’t afford a seat, why not enjoy a virtual trip from the comfort of your reclining, ergonomic desk chair? Just hit play below and enjoy the views…

How is helium made?