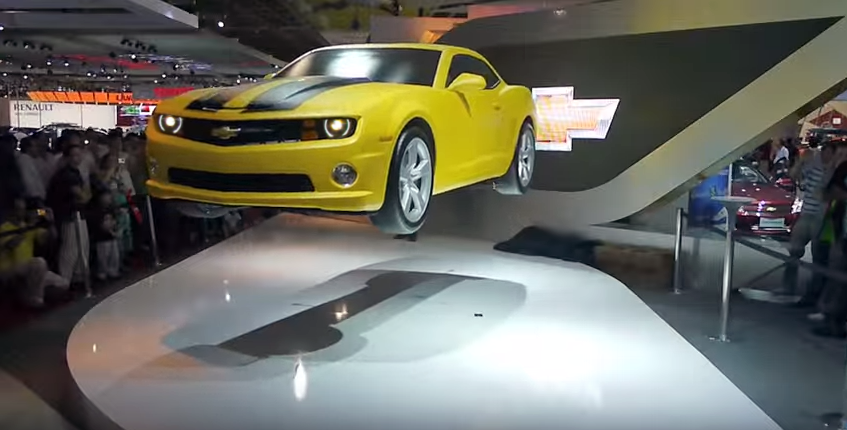 From flying Camaros to perfectly choreographed floating orb displays, a company in Germany is doing otherworldly things with helium and propellers.

Think you’ve seen it all? Think again. You will never forget the moment you’re standing at an auto show and looking behind the ropes at a gorgeous, yellow and black Camaro SS, when right before your eyes, it elevates off of its platform and starts flying around the room.

Zephyr sells wholesale helium for retail stores and events. Get a free quote.

That gorgeous car, with working headlights and tail lights, is basically just a helium balloon, but not quite like the latex party balloons you and I are used to.

The skin is made from polypropylene and polyethylene films, which are durable, flexible, and very thin materials that are not only extremely light, but also prevent the notoriously leaky helium gas from permeating the shell.

Some of the creations, like the car, need to be rigid or semi-rigid, but still must remain light enough to allow the volume of helium to lift it up into the air. That’s where the creators turn to polyurethane foam, which is very light and can be modeled and shaped into any form.

The most basic, most important key to every floating creation is helium, of course, which provides that lighter-than-air lift. Once in the air, the power and control comes from the company’s patented soft propellers, which allow the driver to operate the helium crafts from a remote control, similar to how you would fly a drone.

The people behind the helium wheel

The company that performs these magical arial ballets is called Airstage, and they’re revolutionizing the way we think of traditional helium floats.

If it wasn’t impressive enough to create a giant helium car and drive it in the sky, or watch an astronaut space walk a hundred feet over your head inside of an area, have a look at the Airstage’s signature creation: AirOrbs.

These individual, lighted orbs fly together in unison, performing a perfectly choreographed arial ballet that can resemble some backwoods UFO sightings.

The helium dirigibles can be flown two different ways. For the single, large creations like the cars or astronaut, an expert pilot usually flies the objects using a highly complex, four dimensional remote control. But not always…

Some of the helium balloons (particularly the AirOrbs) are loaded with onboard motion capture optical tracking systems that link back to a computer-controlled flight program. When activated, the orbs fly autonomously and, with any potential for human error removed, perfectly in unison with each other.

An awful lot of work, planning, and technology goes into the creation and execution of just one of these helium floats, so we’ll leave you with a look behind the scenes into the making of an Airstage production from the Night Parade in Seoul, South Korea: