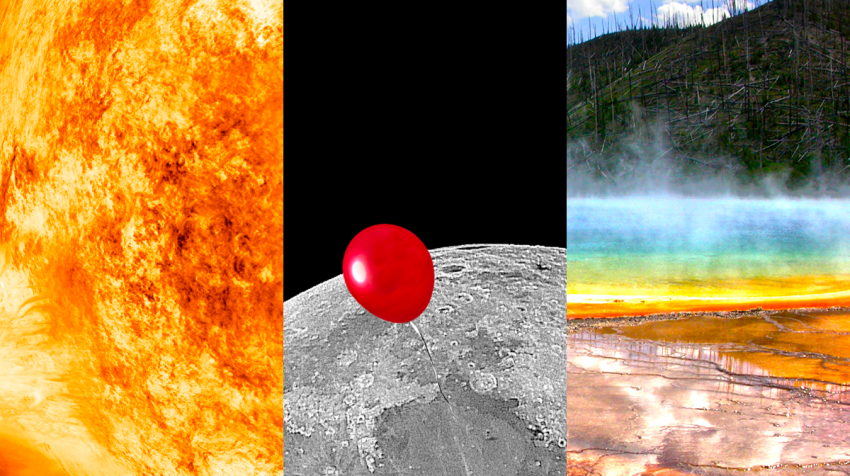 From Yellowstone, to the moon, to the sun, here are three (maybe not so) wild ways we could access unlimited helium supplies.

Helium is a finite resource, here on Earth anyways. However, in space it is being produced every single second in such quantities we almost cannot even fathom it.

In fact, it’s blowing right by and leaving our planet right now. So here are three ideas that could tap into those unlimited helium supplies:

We haven’t nailed down nuclear fusion here on Earth to be able to make our own helium. But the sun does it every second.

Our sun is a helium factory. OK, it’s actually made up of about 25% helium, but it’s spewing it out into space around the clock in the form of coronal ejections and solar winds. That means, helium is blowing right by us all the time, but it doesn’t enter our air because the Earth’s atmosphere deflects it away from our planet.

So we’d have to capture it at the source – the sun – using a space mega-structure idea called a Dyson sphere.

A Dyson sphere is basically a massive bubble that traps and collects particles to make them usable by humans.

Initially thought up for the purpose of having unlimited solar energy, it could also be used to trap elements like helium.

Crazy idea right? Maybe not… scientists think we could be as close as 25 years away from the first phase of this plan becoming possible. Read more about it here.

We basically have unlimited helium supplies too. Get a free online helium quote from us here.

You astronomers may have read the first idea above and thought, “Wait, our atmosphere deflects the sun’s helium away from us. But our moon as no atmosphere.”

Bingo. The top experts believe that because the moon as no atmosphere, that the dust on the moon’s surface has actually been accumulating helium ejected from the sun for millions of years.

So theoretically, we could mine the moon’s dust for unlimited helium supplies, which would replenish endlessly as the sun continues to eject the element.

This idea is actually not as wild as you think. In fact, there are several countries and private firms working to get back to the moon for this very purpose. And they’re very, very close to launching.

While helium here on Earth is indeed a finite supply, you may not realize that Yellowstone National Park has a massive reserve of helium below it. An estimated 60 tons of helium is being ejected from the park every year, which is simply rising up and escaping into the atmosphere.

So in theory, we could build a system of large mass spectrometers around the borders of the park that could purify the air over Yellowstone, cooling and condensing the helium particles onto dust particles, which would weigh them down and prevent the helium from escaping into space.

The tricky part would be collection of those particles, which would have to be done in the same airspace. Perhaps using winds aloft to blow the particles outside of the park borders, or perhaps drones or even giant helium weather balloons with a capture system to suck them directly out of the air…

Yes, it’s also a wild idea. But the reality is, we have a lot of helium leaving Yellowstone. If we can figure out a way to collect it while respecting the park itself, we wouldn’t have to travel to space to source unlimited helium supplies just yet.

Top 3 tips for saving helium in your retail stores

Helium plasma is on the (non) cutting edge of surgery