Grades of helium: the differences and uses 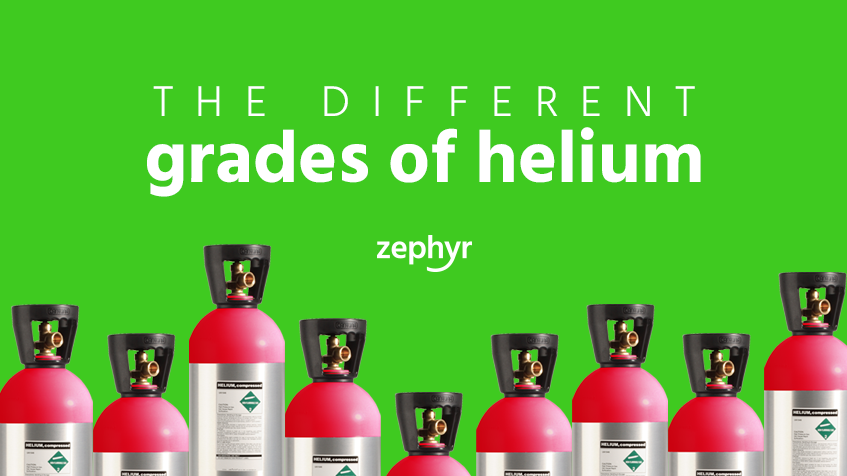 Helium has many uses, from cooling MRI machines to finding leaks in ships, but there are many different grades of helium. Which is which? We break it down.

How we measure grades of helium

Before we get into the different grades of helium, let’s talk about the grading system itself, which is really quite simple. The easiest way to remember what the purity of any grade of helium is, is to simply look at the grade itself.

An overview of the different common grades of helium

Now that we have the grading down, let’s look into the different grades of helium and what they’re primarily used for.

Note that within each of the different grades of helium, there can be even further variations within each grade, depending on your helium supplier and your specific need. Each variation will always contain the same grade purity, but it’s the impurities, things like argon, carbon dioxide, neon, nitrogen, oxygen, and even water, that will have a different composition.

Grade 6 (6.0 helium = 99.9999% purity)
The closest to 100% pure helium, 6.0 helium is used in the manufacturing of semiconductor chips – the tiny wafers that pack the power behind your smart phones, computers, tablets, televisions, and more. It’s also used in laboratories for scientific research, laser cutting, MRI machines, and as a carrier gas in gas chromatography.

Grade 5.5 (5.5 helium = (99.9995% purity)
Like 6.0 helium, 5.5 ultra pure helium gas is typically considered “research grade,” also used in chromatography and semiconductor processing, as well as lab research, MRIs, as a shielding gas in welding, a cooling gas for fiber optics, and other industries that require a fine purity helium gas.

Grade 5 (5.0 helium = 99.999% purity)
This high purity grade helium is also widely used for gas chromatography, mass spectrometry, and specific laboratory research when higher purity gases are not necessary, as well as for weather balloons and blimps.

Grade 4.7 (4.7 helium = 99.997% purity)
A “Grade-A” industrial helium, 99.997% helium is mostly used in cryogenic applications and for pressurizing and purging, but is also used as a control atmosphere in manufacturing, as a cover gas during welding, in breathing mixtures for divers, and leak detection.

Grade 4.6 (4.6 helium = 99.996% purity)
Grade 4.6 industrial helium is used for weather balloons, blimps, in leak detection, as a shielding gas for welding, a coolant in rockets and medical applications, and as a carrier gas in the analysis of residues.

Grade 4.5 (4.5 helium = 99.995% purity)
Often the grade most commonly referred to when people say “industrial grade,” 99.995% helium is most commonly used in the balloon industry, but is also used as a push gas in MRI applications.

Grade 4 (4.0 helium and lower = 99.99% purity)
Any helium that is 99.99% and down into the high 80 percents is within the range of purities referred to collectively as “balloon grade helium.” While Grade 4 helium is used mostly for balloons (although the mid-high 90 percent heliums could be used in leak detection, air bags, and heat transfer applications as well), that doesn’t necessarily mean that higher grades of helium aren’t used in balloons. In fact, in many cases, it may be Grade 5 helium.

Why lower grades of helium can cost more than higher grades

The majority of helium that is supplied to helium customers is actually Grade 5 helium, which is often a higher grade than is needed, particularly in the balloon industry. Despite what you may be thinking, it’s not so that helium producers can make a bigger profit. In fact, it can cost substantially more to produce a lower grade helium.

How could that be?

Phil Kornbluth’s article in this month’s CryoGas International titled, “Increased Availability of Balloon Grade Helium” does an excellent job in explaining the finer details behind the reasoning for this, but the short of it is that essentially comes down to the efficiency of mass transportation.

The majority of the world’s helium needs to be transported as a compressed, bulk liquid. That’s simply because you could only move a fraction of helium in an expanded gas state compared to a compressed liquid. (Think of recycled aluminum cans, for example. You can fit exponentially more cans in the recycling bag if you crush them down first as opposed to just tossing them in intact.)

Liquid helium is inherently extremely pure — far more pure than even Grade 5 helium actually, and liquid is the most efficient way to move product. Therefore, for helium suppliers to purposely offer a lower grade helium, they would actually have to add new operational methods and separate processes and transport specifically geared for the lower purities. All of this adds big costs of course, so most distributors simply stick to the industry standard transport of Grade 5. That is why for and end user of helium, a lower grade can cost more than the higher grades.