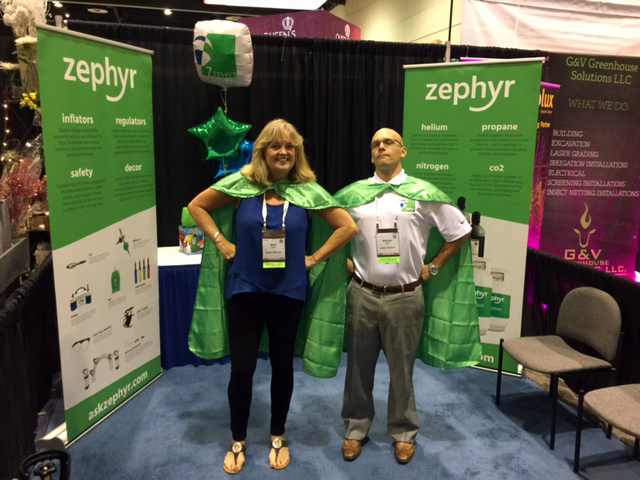 by Kathi Leidenon 21 October 2016in Helium

We’re back! Zephyr had a great show in Orlando this past week and we wanted to share a few stories and photos with you from the event.

If you aren’t familiar with the PMA Fresh Summit Convention and Expo, it is one of the largest exhibits of produce and floral vendors on the planet. This year there were more than 1,100 different exhibitors from 60+ countries, so it truly was a global showcase for us to get our name and products out there.

As you know, Hurricane Matthew came through Florida just before the show was supposed to begin. It was announced the show would go on as scheduled and that was a great thing, but we’d be lying to say we didn’t experience a mix of emotions as we came into town.

We were of course excited to exhibit, but at the same time we felt a certain sadness. In times like that, you tend to regain a sense of what’s truly important in life. We are a company, yes, but remember that we are PEOPLE that comprise the company. From every person at Zephyr, our hearts go out to everyone affected by the storm.

The show must go on

The Fresh Summit was massive! We had a chance to talk to people from all over the world — Brazil, Chile, Colombia, Germany, Japan, Mexico, New Zealand, Panama, Peru, and more!

It was a great opportunity for Zephyr to get its brand in front of retailers and buyers. We were a perfect fit for many produce markets and florists who use balloon programs in their locations.

For this show, we thought we’d introduce a new character to distinguish ourselves and represent the Zephyr brand. And we will tell you— “He” was the only one like it in the entire convention.

“He” started as a sort of parody of one of the most popular animated children’s shows of all-time, and anyone alive in the 1980s (which is just about all of us in the industry) instantly recognized the character. He2Man was a big hit — he even attracted a couple of famous Americans to the booth to meet us. You may recognize them: Zephyr’s booth was also directly across from a phone and tablet charging station. So we took advantage of the positioning by creating He2-Man’s secret source of energy: Zephyr Juice.

All that walking and talking can tire a person out, so attendees could recharge themselves while recharging their phones by chugging a bottle of Zephyr Juice. We left a bunch of bottles of our special green elixir at the station for people to take. Zephyr Juice was a HUGE hit. Several people came back to our booth the second day to get more.

Two different vendors — one from Puerto Rico and another from China — actually demanded that we sell and ship them pallets of Zephyr Juice to sell in their stores. We were forced to decline of course, explaining that we wanted to stick to our core competencies of helium (and other gases) and equipment. We had the chance to get in front of a bunch of major global brands and talk to vendors from all over the world. All-in-all it was a GREAT show and we are thrilled to be able to share the experience with you.