HomeHelium150th anniversary of the discovery of helium 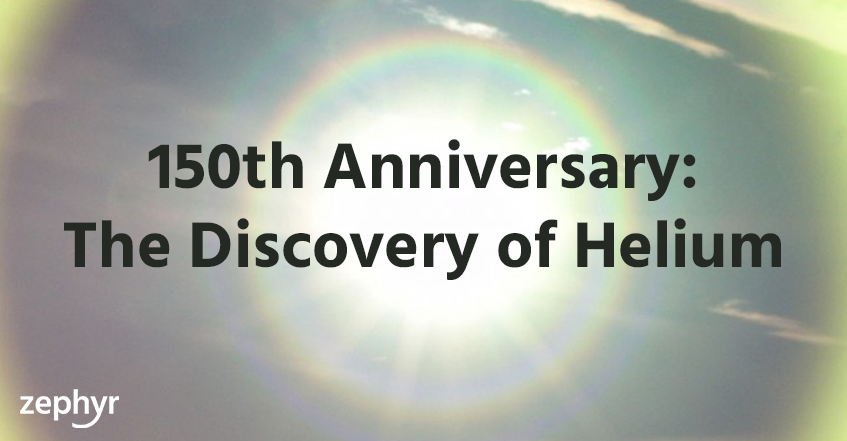 150th anniversary of the discovery of helium

It’s been 150 years since the discovery of helium — a relatively short time in the grand scheme. Let’s see where helium is today and where it’s going.

The discovery of helium

One hundred and fifty years ago, French astronomer Pierre-Jules Janssen was studying a solar eclipse when he saw a bizarre yellow line in the spectrum of colors. He conferred with another astronomer, Sir Norman Lockyer, who concluded that the yellow color couldn’t have been created by any element yet known to man. These two gentlemen hypothesized it was an all new element, which they named “helium,” after the Greek sun god, Helios.

You read that right. The discovery of helium was first made on the sun. It wasn’t until 1895, 27 years later, that chemist Sir William Ramsay was able to produce evidence of it existing here on Earth.

What we’ve done with helium since

Since the discovery of helium, humans have figured out a lot of incredible uses for the gas. Aside from parties, parades, and blimps, it’s used in everything from welding to fiber optics and between. While we can’t list the hundreds of uses for helium that exist today, we can offer up some of the more interesting ones.

Need helium for your balloon program? Get a free online helium quote from us here.

Explorers have used helium to cross the Atlantic Ocean, and artists have compiled some incredible, truly jaw-dropping displays of creativity.

More than likely, you sit in front of a hidden compartment of helium every single day when you’re driving to work.

Helium is also used by scientists to cool the biggest refrigerator in the history of the world — the Large Hadron Collider.

Without helium, you wouldn’t have that smart phone or computer that you’re reading this very sentence on. And helium is just now being used to make the hard drive in your computer exponentially more efficient and powerful.

Although people have come a long way with their innovations since the discovery of helium 150 years ago, an even more impressive list of uses for the gas is building each and every day. With the advancement of technology comes further discoveries of the gas’s potential.

For example, researchers are realizing that helium can be used to locate diamonds underground without ever having to lift a shovel or power up a drill.

Helium is also being used to explore a new, aerial way to power our homes with sunlight.

Engineers are using helium to power walking robots. Why? Apparently to help water your house plants when you’re gone. At least for now…

And architects and engineers have put together an award-winning plan for quickly deploying emergency skyscrapers in disaster areas. Like origami, the skyscrapers “unfold” upward, lifted by simple helium-balloon power.

NASA is also using helium for some interesting purposes, like carrying bacteria into space, searching for alien life, or building inflatable floating cities to allow astronauts to live above the surface of Venus.

And then there was the very recent discovery of antihelium — something scientists long theorized should exist. Yet, it wasn’t actually discovered until 2011 and we really don’t know too much about it yet. Read more about antihelium here.

Little did Pierre-Jules Janssen and Sir Norman Lockyer realize a century and a half ago, that the yellow line they identified around the sun could lead to incredible advancements like computers, smart phones, or treating lung ailments. Humans have done some incredible things since the discover of helium, and it’s anyone’s guess what the next 150 years will bring.

What to Do If You Smell a Propane Gas Leak